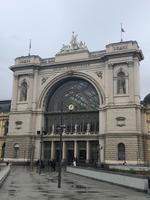 In today's clip I talk about pyramid schemes. Often cryptocurrencies are portrayed as pyramid schemes by traditional media outlet's and so called financial experts. Saying cryptomoney is a pyramid scheme shows lack of understanding about the matter, actually everybody making such acusations should be ignored altogether, but somehow traditional media keeps on putting people that talk in this way on a pedestal, probably because they are in debt with banks and they need their favours in order to stay in business. Media today is unfortunately not independent anymore. It all comes down to how journalists receive their salary, are they payed in traditional fiat currency like euro or dollar, or are they, like this blog, being payed in cryptomoney like Bitcoin of e-Gulden EFL?

Devide and conquer is how the powers that be keep their position, we see that in today's time in many shapes and forms, one of the latest is the #metoo hype that tries to build a gap between man and woman. By bashing Bitcoin, newspapers try to influence peoples decision against investing in Bitcoin. Ever since I started my crypto journey people are telling me that Bitcoin isn't worth anything and it is going to crash, most of them simply copying what they heard on the media. I just can't comprehend how these babyboomers can keep their faith in these media outlets. I personally was done with it after 9/11 and knew I made the right choise after those weapons of mass destruction in Iraq, but why other havn't found out they they are not being told the entire truth is a mystery for me that I will probably never solve.

As stated before, money itself isn't worth anything. Instead, people give value to that money by giving their time and energy for it. Within the traditional fiat system it is force and surpression that creates that value. I'll eleborate on that point a bit by giving you my view on the fiat pyramid scheme.

When a baby is born in the Netherlands, the father is obliged to make a declaration to the state within 3 day's after the event occurred. At that point in time, he gives the desired name and the state then attaches a number to that name, a new person is created. This legal contract is then used by the state to borrow money from banks. Banks look at the 2 numbers (mother and father) that produced the new number. Depending on their tax payments, the new number get's a certain value. In this way, a baby in the Netherlands is worth more then a baby in Hungary, simply because the parents have payed more taxes in their lives. I believe this is a form of slave trading and for me it explains why there is so much inequality in the world and why that inequality will only grow bigger in this current debt system.

The value given to the new number is based on the taxation that this newborn is going to be paying when it turns 18. Based on this future expected revenue, governments can receive a loan today.

When we look at history, we see that the numbers in fiat money are always growing, ask your gransparents what a bread costed when they where 10 years old and you will see the pyramid scheme in play. Because fiat money is in constant devaluation, there is a constant need for revenue to pay back for that loss. Not only causes this war, but also out environment is being sacrificed for profit, things that I do not want to support, but kind of have to when I accept the euro as my money.

To be honoust, I don't know where this blog is going, I just try to show my side of the equasion and try to explain what motivates me. This is just a part of the full story, so let's end with the clip I made today and see what subject comes to mind when i wake up tomorrow. I just want to say, if your not on the cryptocurrency train, you should board it!