You see, part of the story is that it's not about me, I'm not really the story. But the more I play this game of life, the more that I come to realize that it really should have been. I want to apologize before writing this article, but there is just some believe in me that I need to explain for myself.

Yoshi Livo is not just a name that I made up, but it's my lifemotto that reminds me every day that we need to make this world into some better place. For me that means more in balance with the planet we live on. Born in the Netherlands, I've never experienced war in my life, the only war I ever saw was the war on the news. I've been blessed with growing up in innocence and cursed with the brain capacity to find out about it.

Last weekend the largest parade, in many years of Dutch history, took place in Amsterdam to celebrate freedom. At the same time a ƒormula 1 race was won by the Dutch/Belgian Max Verstappen, to whom I dedicated the title of my last blogpost. The victory gave him the lead in the championship, but I stand by my point that it would have been worth it to see those Dutch people on the track to stop the race. This radical stance makes me impossible to work with, but it's the result of all too many people that refuse to work with me in the past.

With some small delay, due to some personal circumstances, I finish writing this text within 24 hours after El Salvador has declared Bitcoin legal tender in it's country. El Salvador is the first country in the world to make this step and has added 400 bitcoins to their balance sheet and now hold part of their financial reserves in the world's oldest and therefore most proven cryptomoney protocol, Bitcoin. Cuba has already announced it wants to follow the lead of El Salvador and this will change the landscape of Bitcoin to a more political one, but what every news channel will report about today, is how the value of Bitcoin has dropped over 10% in the last 24 hours.

If you are able to zoom out of the cryptocharts and look at the bigger picture, it's quite easy to see how a connection to the traditional finance will mean that the Dollar price of all these coins will be influenced to guide the narrative of main stream media. A story is being told and there is no lie in any of the reports that announce today that the value of cryptocurrencies tanked. If you have a little understanding of the matter it is easy to see how the truth is being manipulated, but if you are prepared to be told a daily bedtime story while you watch television after a long day of work, then you can go to sleep peaceful tonight, knowing that these terrible bitcoins dropped again in price, hooray for all governments around the world that keep their currency stable and reliable. I would be extra motivated to go to work the next day and fill my gastank for whatever price the meter tells we i get for my paper debt.

If you are unable to see beyond the crypto manipulation, you probably don't even know that your paper currency is a debt, because it's in your wallet, so how could it belong to somebody else? The amount of distraction that is needed to keep the masses unknowing is enormous, today we see it in the form of a fear campaign that uses a virus to enforce unprecedented terror to the citizens. If you take your eveningnews for granted when they talk about Bitcoin, how will you ever find out that the current events surrounding this virus are about control?

I've always been amazed about how little knowledge people have about the money they use. I really tested it myself by standing on the street and asking people about it. None of the Dutch people knew what they where working for about 9 years ago when I asked them. I often heard that the currencies where backed by gold, but I hope that I don't have to explain the readers that this is another one of those facts that a lot of people have completely wrong. The money is backed by extortion, because police believe they can put a gun on your face if you don't pay your taxes. As soon as your birth is declared at the government, the birth certificate can be used to cover a debt, because you can be taxed in the future and your existence will probably cause a lot of revenue in the future.

With the wrong information also come the wrong choices. What a lot of pensioners and upcoming pensioners  don't realize, is that 2 dates matter on your pension contract, the date that you start the agreement and the day you achieve the promised date on the contract. Most of the people choose to receive a monthly payment after that and this payment will be adjusted to inflation with the interest rate at time of the occurrence as leading number to determine the yearly adjustment. At this moment in time the interest rate is near 0%, this means that all the people that currently start their retirement will never get a correction and over time inflation will eat them alive. Let me make extra clear that the majority of the saved up funds in western countries today belong in the so called baby-boom generation and these people all go into retirement now. It is an event that could have been planned a long time ahead, because peoples age moves forward in time with a certain speed of about 365 days per year. I don't believe many people in the west have read into their pension details, but I'm sure they all work in the same way as stated above.

By being able to change peoples perception of reality, you can gain a massive influence on peoples behavior. I was very close myself to be used as a pawn in the big game of power, but looking back at the wrong people I surrounded myself with at that time, I think my gueardian angle was very busy that day. Since the entire day was covered by a lifestream and the blockchain of EFL is online all the time, my would-be donation could have moved the price of EFL over 50 euro, but instead it was an empty blow. The people that planned this move for me probably knew how easy I was to influence, and my personality would have become related to this crypto that could be massivle manipulated because of the amount of coins that where bought on the market between april 2017 and januari 2018.

What kind of saved me, is that I wanted make my donation to Liberland only after I received my passport. I've done plenty of things for the Liberland flag and that way I would feel better about participating. On Friday I was called on stage during the pre-dinner ceremony to receive my passport, but nobody told me anything about any ceremony and I was filming for this documentary I shared with you in the link above. In the end I received my passport on Sunday, on the water, but within the Liberland borders, but it means I did not want to voluntarily put in a donation on Saturday. Instead of just handing over some cash, like most other donators did, I signed documents with the representation of Liberland later that year and we agreed I would cover some of the expenses needed to cover the cost of the operation in return for Liberland Merit. Since the Merits are distributed in March of 2019, I'm asking to add the token ID of the Merit to the Liberland website. It has resulted in a resignation of the minister of finance, but to this day the simple line of code is not added to the website of Liberland and the money for that reason is worthless. 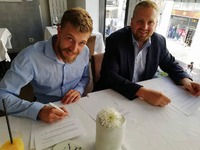 Because I calculate my net worth in satoshi's and the deal with Liberland happened during a bear market, I managed to make a profit from my involvement with the project. I believe I'm the only one involved that managed to do that and this might be another reason why my reputation is constantly under attack by that group that surrounds the current leadership. I would rather have seen that we would have empowered each other, but in a way I can be very glad to have managed to stay out of the big picture. My believes today are more strong then ever and I cherish the blessed day's where I make my predictions in peace and where I can take as many day's off as I want, without disappointing anybody. In away I'm a fool to tell you that this peaceful life can be over in an instance, because as soon as the EFL market boosts to 10.000satoshi per unit, I believe my day's will get a whole lot busier. Yes, it's 5 bitcoins to get there, for most people a huge amount of money, for some people a whole lot less, but you will receive back EFL coins in return and if the Dutch people will pick up on using the coin it can also make you a profit. Once we get there I believe I will be able to properly explain everybody what YOLO + YCLO = [ :) + <3 ]² really means, but I can already give away that it's nothing more then what is written today, You Only Live Once + Your Children Live On = happiness and love squared.

Your Children Live On is what made Yoshi Livo and it is what is missing in today's western society. I can't change the world by myself and that's why I believe is the perfect political coin that I can use to achieve my goal. The Netherlands might be a small country, but it has a lot of influence in the world and if we can change the minds of people there it will have a huge impact on how the world will move forward. Yes there is a lot of work to do, but who is going to do it? For the ones that doubt my motive or hear some bad stories about me, feel free to keep on following the stream or participate in the Telegram chat, but in case you feel sympathy for my goals and want to help me achieve them, please consider buying a couple EFL's, because I really do believe it will serve us all well. That is the goal of my stream, and of all the stories I write on this blog, or at least, what I want to try to achieve with it.

Time is catching up on me, so I guess the next blogpost will just be a new one, time for me to publish what a wrote and start a new stream. Until 9/11 we focus daily on the attack of 20 years ago. There will be a special 9/11 episode on Saturday and for my birthday I'm inviting special guests, feel free to contact me if you know of something fun.